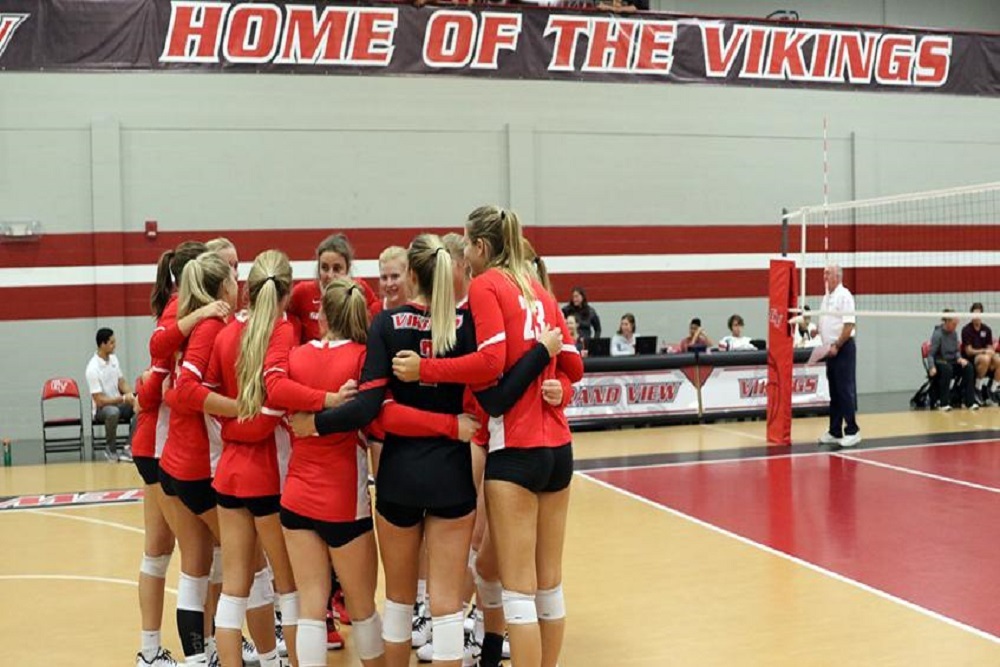 Des Moines, IA – Grand View women's volleyball hosted the Mustangs of Mount Mercy University this evening, October 8. The four-set match ended in a Viking victory which increased their overall record to 16-8 and 10-1 in conference.

Starting off the first set strong, was Gianna Gourley (JR/Webster City, IA) behind the service line. Gourley collected an ace on the first point putting Grand View on the board first, 1-0. A consistently back and fourth game until the Vikings stopped the Mustangs at their 17th point. A service run by Miranda Greathouse (SO/Ankeny, IA), forced Mount Mercy to take both of their timeouts. Emily Box (FR/West Point, IA) scored the final point off of the hand of the Mustang blocker, 25-17.

In set two, the Vikings came out to a roaring start, leading the Mustangs 7-1 after a kill from Ashley Prusha (SR/Amana, IA). Rylie Olson (FR/Osage, IA) helped grow the lead after collecting back-to-back aces mid-set, giving Grand View a 12-5 advantage. The Vikings collected their second set win, 25-14, after a stuff block from Prusha and Box.

Scrappy defense from the Mustangs in the third set, led to a close game. Going on a five-point serving run, Mount Mercy, grew a lead 16-10. Junior hitter Baylie Katcher (JR/West Des Moines, IA) collected a kill to tie the game up 22-22 after the Vikings closed the gap. Mount Mercy ended up closing out set three with a two-point win over Grand View.

In set four, the Vikings put their foot down. Leading the Mustangs early, 10-6, Mount Mercy called their first time out of the set. The Mustangs closing the gap to 13-11, Box smoked the ball between the blockers of Mount Mercy. Senior libero, Keely Larkin (SR/Johnston, IA) served five consecutive points and helped keep the Mustangs out of system. Grand View collected the fourth and final set after a kill from Alexa Aldrich-Ingram (JR/Iowa City, IA).

Offensively, the Vikings were led by Box who collected 18 kills, hitting a.385 efficiency on the four-set match. The hands behind the offense was senior setter, Trystin Luneckas (SR/West Branch, IA), who tallied 40 assists on the night. Grand View was led defensively by Greathouse and Larkin who had 24 and 17 digs, respectively. As a team the Vikings had a total of 7 blocks.

Grand View will host their home tournament this weekend at the Johnson Wellness Center on October 11 and 12. The Vikings are set to play on Friday at 7:30 PM versus Viterbo University and on Saturday at 11:30 a.m. and 4:30 p.m. against Montana Tech and University of Providence.