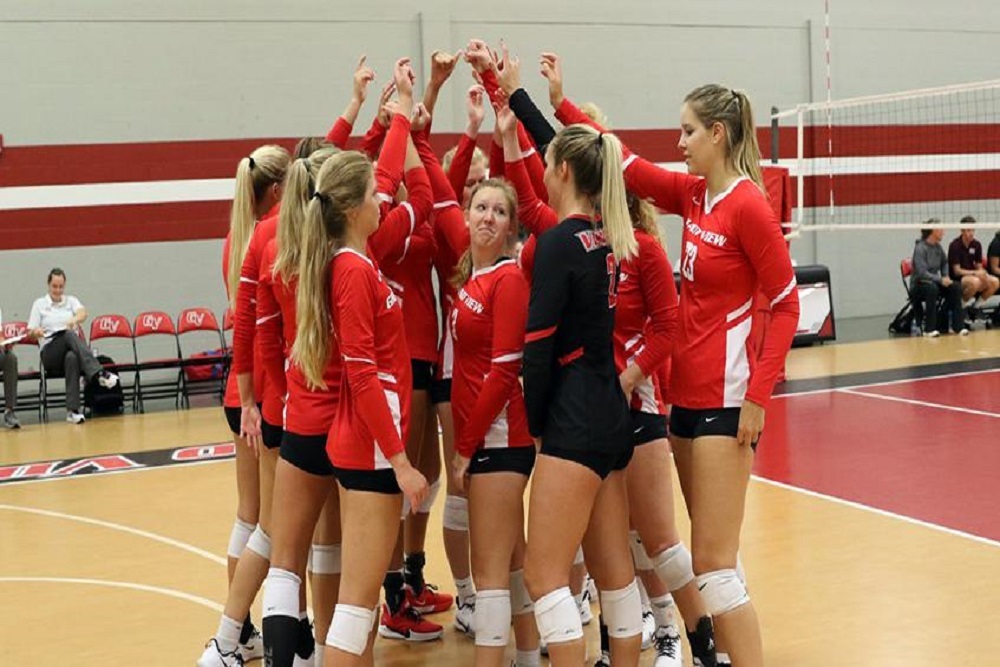 Grand View women's volleyball traveled to Dubuque, Iowa to take on the Pride of Clarke University this evening, October 15. The Vikings last match up with the Pride, on September 24, ended in a 3-0 loss for Grand View. After a four-set match tonight, Grand View came out victorious.

Tied 3-3 early in set one, Kyla Fitzsimmons (JR/Algonquin, IL) rolls the ball to the deep right back for a kill to put Grand View up 4-3. Grand View continued to roll, leading 10-6, after a huge block from Ashley Prusha (SR/Amana, IA) and Emily Box (FR/West Point, IA). The Vikings defense continued to shine as Fitzsimmons extended the lead after solo block, 17-11. After a Grand View timeout, earning the side out was outside hitter, Box, with a tool off of the outside hand of the blocker. Finishing off set one was Alexa Aldrich-Ingram (JR/Iowa City, IA), who tallied a assist block with teammate Prusha. Vikings took the first set 25-23.

Scrappy play by the Pride put Clarke ahead 7-3 beginning set two, forcing Grand View to take a timeout early. Tying set two back up, 8-8, was Prusha with a kill to the right back defender who could only get one hand on it. Grand View rallying back, 15-12, when Miranda Greathouse (SO/Ankeny, IA) collected a huge dig for the Vikings that ended in a kill from Fitzsimmons. Stepping behind the service line was sophomore setter, Baliey Sullivan who chipped in her first ace of the night, putting Grand View ahead 22-16. The Vikings took set two, 25-19.

Leading by two points early in set three, 8-6, Aldrich-Ingram and Luneckas ran a quick in the middle, ending in a kill for Aldrich-Ingram and helping extend the Viking lead. Tied 19-19, the Vikings captured the lead again after another kill down the line from Fitzsimmons. At 20-20, the Pride scored the next five points to take the match to set four.

In set four, Marie Goodwin (SO/Des Moines, IA) went on a four-point serve run accompanied by her teammate Luneckas with a stuff block, putting the Vikings up 17-14. Luneckas tallying her first kill of set four to extend the Viking lead, 18-14. An aggressive push towards the end by Clarke, wasn't enough to stop Grand View who won the fourth and final set, 25-20.

The Vikings were led offensively by Fitzsimmons who collected 15 kills, hitting a.237 efficiency. The force behind the offense was Luneckas who tallied 31 assists. Defensively, Greathouse anchored Grand View with 22 digs. As a team, the Vikings had a total of 12 team blocks.

The Vikings will travel to Fayette, Missouri this Friday to compete against the Eagles of Central Methodist University. Central Methodist has yet to lose a match in league play. The first serve is set for 7:00 p.m.