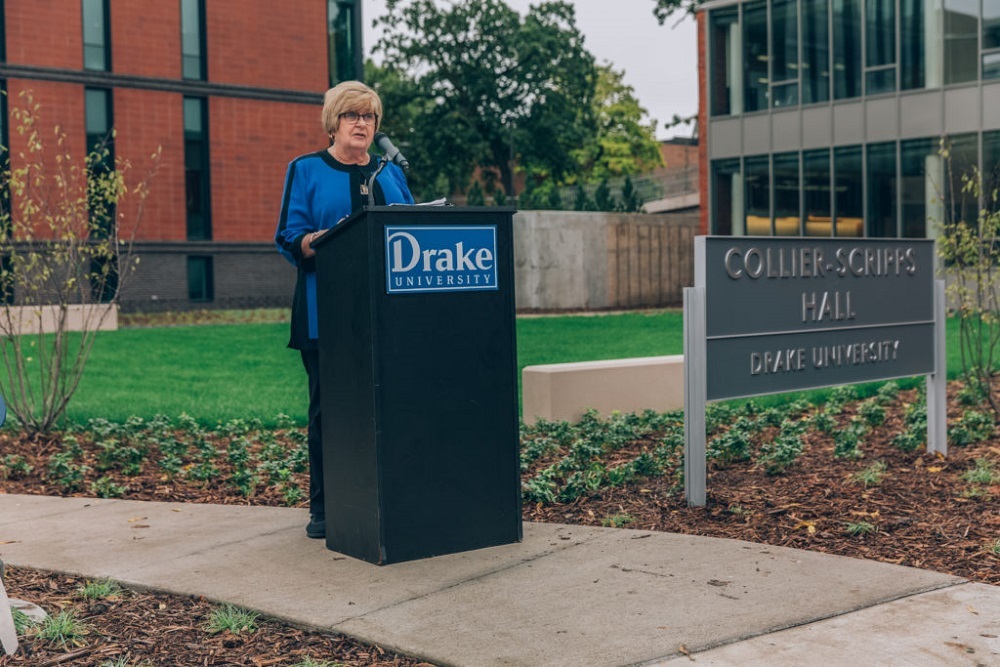 Before Janet McMahill joined the faculty at Drake University, she had been a scholarship chairman, chaplain and secretary of Alpha Phi sorority, Panhel Rush secretary, candidate for Greek Week Queen, and a Miss Drake Finalist. She also served on Drake’s National Alumni Association Board of Directors; was selected for the leadership honor society Mortar Board and the prestigious honors program Who’s Who in American Colleges and Universities.

And that was all before her graduation in 1971 when Jan received a bachelor’s degree in speech communication.

After graduation, McMahill would lead a distinguished career in the field of education, garnering more accomplishments and accolades along the way, including a master’s in science education from Drake and a Ph.D. in industrial education from Iowa State University. While impressive and certainly laudable, these accomplishments are not what people would distinguish as McMahill’s legacy, as she retires in 2020, following 32 years of service to Drake.

McMahill will retire as dean as of December 31, 2019, and will have a faculty sabbatical in the spring semester before retiring from Drake in June 2020. She has held the role of dean since June 2004, when she was promoted interim dean for the school of education. In January 2005, she was named the dean of Drake’s College of Education.

“Dean Jan McMahill is a relationship-builder,” said Provost Sue Mattison. “Her legacy to Drake University is a testament to those relationships—the beautiful Collier-Scripps Hall, where the School of Education is housed. I am proud of all Jan has accomplished in her years of service to Drake.”

Collier-Scripps Hall is one of the most tangible marks of McMahill’s legacy. The four-level, 55,000-square-foot building opened in August 2017 and the School of Education relocated back to the heart of campus for the first time in decades.

“One of her largest visions was to bring the School of Education onto the actual Drake campus,” said Debbie Scripps, ED’72. “It took many years, lots of travel to alums, and money. Jan never, ever backed off, running her mileage up year after year in her car to help make this a reality.”

Scripps and McMahill met at Drake in the 1960s, when the School of Education was not on the central campus and a sturdy walk from their sorority house, Alpha Phi. When Scripps and her husband Ric, ED’70, were approached about making a gift to Drake, they knew immediately that their gift would go to the School of Education. They first considered a scholarship, but another vision was afoot.

“If you know Jan and her true desire to pave the way for better opportunities for the SOE, then you will understand our offer to name a scholarship for the Dean of Education in Jan’s honor was denied,” said Scripps. “Instead, she insisted that we put the funds to ‘brick and mortar’ to get the building going as soon as possible. Now, it is the most beautiful building on campus. Better yet, it is used all day and night by students of different majors. It has become a Bulldog ‘beehive’ for study, art and communication.

This drive and ambition have been woven into McMahil’s character since at least her years as a student. Scripps remembers McMahill as an achiever who seemed to know the direction she wanted to follow and stuck with it, something others noted as well.

“She said for many years she was going to get a new building on campus for the School and she never lost sight of that goal,” said Sally Holmberg, ED’63, GR’69, GR’83, GR’94. “There were times it looked like it wouldn’t happen, but she stayed true to her goal. She worked hard at getting donations and developing friendships with many to get the building completed.” Holmberg and McMahill met while Holmberg was completing her doctoral work. She would go on to work at Drake with McMahill as her supervisor.

This impressive building matches the extraordinary nature of the School of Education. From undergraduate and graduate programs, to continuing education, teacher cohorts. Drake Head Start, adult literacy programs, and other innovations, the purpose and what dwells in this building are paramount, and indicative of McMahill’s leadership, tenacity, and commitment to training prepared, thoughtful, education professionals.

Steve Flaherty, a senior majoring in secondary education and history from River Forest, Ill., has served on the Dean’s Advisory Council, working alongside McMahill. He also is president of Kappa Delta Phi, the education honors society. When he came to Drake, Flaherty was looking at both health sciences and education programs and declared a major in the former his first semester. But by his second semester, the education program pulled him in, as he engaged with other students and found his way into leadership positions, practicums, and other immersive experiences. From McMahill, Flaherty saw a balance of personal and professional traits that built relationships with welcome and warmth, but clearly set expectations.

“She always pushed me to do great things and instilled her ambition in others,” said Flaherty, who will graduate in May, ready to teach a classroom of young minds and get his own students excited about learning.

“Since coming to Drake, my passion for education has only increased and led me to new discoveries in myself and how I will teach my future students,” said Veatch.

Veatch is also on the Dean’s advisory board and is involved with Save the Children’s Action Network on campus and has completed practicums in the Des Moines, Waukee, and West Des Moines school districts, and will student teach in fall 2020.

Students like Flaherty and Veatch will graduate from Drake and head to roles similar to where McMahill began. McMahill started her education career as an English teacher in the Des Moines Public Schools. Then, she served as director of special projects at Iowa Central Community College, and director of language arts for Fort Dodge Community Schools. In 1985 she received the Outstanding Young Iowan of the year, awarded by the State Chamber of Commerce for her work in establishing a new educational plan and program at North Correctional Facility.

In 1988 McMahill stepped into the role of instructor for Drake’s newly created master’s degree program for teachers. In 1989 she took up the opportunity for a tenure track position in the teaching and learning department and effective teaching program. In that same year, she also became the associate dean of the School of Education and director of Extension Education—Drake’s distance learning division, which served more than 10,000 students a year across the United States and Canada.

“That was a big project, impacting many teachers throughout the years,” said Holmberg, who also worked within the program.

Today, distance learning has evolved into the Continuing Education and Professional Development, which offers a wide variety of programming and opportunities for educators everywhere to further their own educations and receive crucial licensing and certificates. The program brings Drake to educators across Iowa, said Chuck Sengstock, who has served as the program’s director since 2005.

While delivery methods have changed from VHS tapes to online, digital offerings, the drive and intention to reach and support teachers and educators has not.

McMahill’s work to make continuing education easier and accessible has strengthened Drake’s presence in the Iowa school system. (Nearly 70 percent of Iowa school districts have at least one administrator who holds a Drake degree.)

“When she came back to work in the School of Education, she had dreams and goals. One of them that she often spoke of was “distance learning’, growing the school beyond the physical boundaries,” said Scripps. “It happened.”

“It happened” seems to sum up McMahill’s approach, whether she is evolving and expanding programs, following through on a vison for a state-of-the-art headquarters for the School of Education, or shaping and launching tomorrow’s educators.

“Dean McMahill leaves behind the attitude that anything can get done. She has such determination and really listens to students,” said Veatch. “She puts her students first and will fight for them to make sure they are where they need to be. She is a go-getter and will work until whatever she wants to do is done to her satisfaction.”

As this chapter closes for McMahill, the School of Education, and Drake, a lasting, enduring impact reverberates in the classrooms, schools, and agencies where alumni educators exercise what they learned at Drake.

“Jan embodies pride in working for Drake, being a Drake alum, and being a good educator and instills these things in those around her,” said Sengstock. “Since I’ve known Jan, she’s been a servant leader. She cares about her staff, the School of Education, and Drake University as a whole.”

McMahill’s departure will be evident, but the future is bright for those remaining and those yet to set foot on Drake’s campus and the School of Education.

Of this legacy, Scripps said, “I hope she realized that her goals exceeded far beyond her dreams and will live on for generations to come.”

What will you miss most about Drake?

The opportunity to work with so many exceptional faculty, staff, and students as they pursue their degrees in teacher education, school and agency leadership or counseling.

What accomplishments are you most proud of from your tenure at Drake?

What is your hope for the School of Education going forward?

That new and existing faculty and staff will remain dedicated to undergraduate and graduate students by preserving the balance between theory and practice while exploring new and innovative practices that comprise the Drake Difference.

What have you been reflecting on as you approach your retirement date?

Pride in my endurance for 32 years of service. The people I’ve met and the countries I have been fortunate to visit. Kosovo is at the top of the list.

Commencement. There is no honor greater than the right and responsibility to award degrees to students of all ages and stages and many countries and cultures.