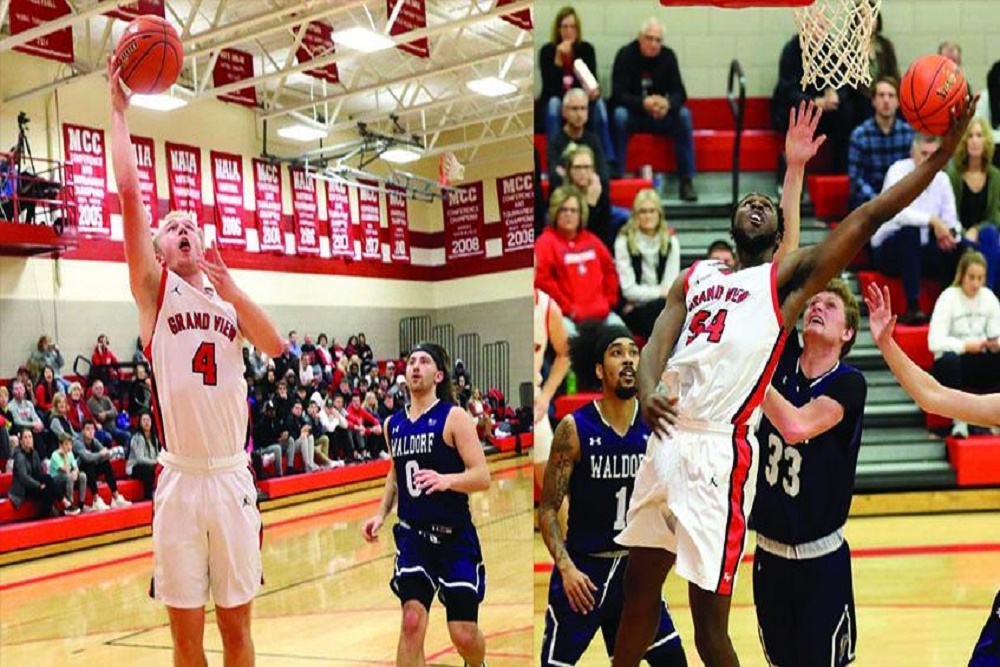 The Grand View men's basketball team wins their home opener 73-71 over Waldorf with a last-second tip-in.

The Vikings came out the gates slow with back to back turnovers on the night, but the ability to defend all night would keep the Vikings in the game. A driving layup by Josh Streeter (JR/Rockford, Illinois) got the Vikings on the board early in the game. The first eight minutes of the game saw a lot of back and forth from both teams as at the twelve-minute mark the game was tied 11-11. The Vikings went on a run when Streeter stole the ball and pitched it ahead to Nana Kodom-Ayensu (JR/Bolingbrook, Illinois) for a monster dunk. Kodom-Ayensu would be fouled two possessions later and add two free throws to the lead, field goals made by Streeter and Drew Johnson (JR/Clive, Iowa) would extend the lead to 21-14 with just under five minutes left in the first half. Waldorf would respond with a run of their own going on a 19-7 run to close the half. Waldorf would go into halftime leading 33-28.

The Vikings would go on a quick 5-0 run to open the half with a layup from Landon Rash (SR/Algona, Iowa) and a three from Streeter. Just like in the first half, Waldorf responded with their own 6-0 run to retake the lead 39-33. Two free throws from Jay Chen (JR/Taipei, Taiwan) and a corner three in transition from Johnson would put the lead down to 1, 39-38. Once again, Waldorf went on a run to put the lead back to six, 44-38. The Vikings would battle to tie the game at 44 with just over eight minutes left. After four minutes of play, the game would be tied again this time at 50. With just over two minutes left in the game, a beautiful spin move by Johnson in transition and an assist from Johnson to Ludvig Saldh (SR/Saro, Sweden) for a corner three would put the Vikings up three with 2:32 remaining. The game would be tied after Waldorf knocked down a pair of free throws with under a minute to go. The Vikings would find Kodom-Ayensu in the post and he would score it with just over :30 remaining. Waldorf had a great possession and beat the Vikings on a back cut to tie it back up with :19 left. The final possession of the game found Rash driving to the rim missing a good look only to have Kodom-Ayensu grab his fifth offensive rebound of the game and put it back in to win the game. The Vikings would go on to win 73-71. The game featured 14 ties and 11 lead changes.

Keys to the Game

Up next the Vikings will host Faith Baptist Bible College at home next Tuesday, November 12th at 7:00 pm. Follow @VikingAthletics for all in-game updates and follow @GVVikingMBB for men's basketball exclusive updates.