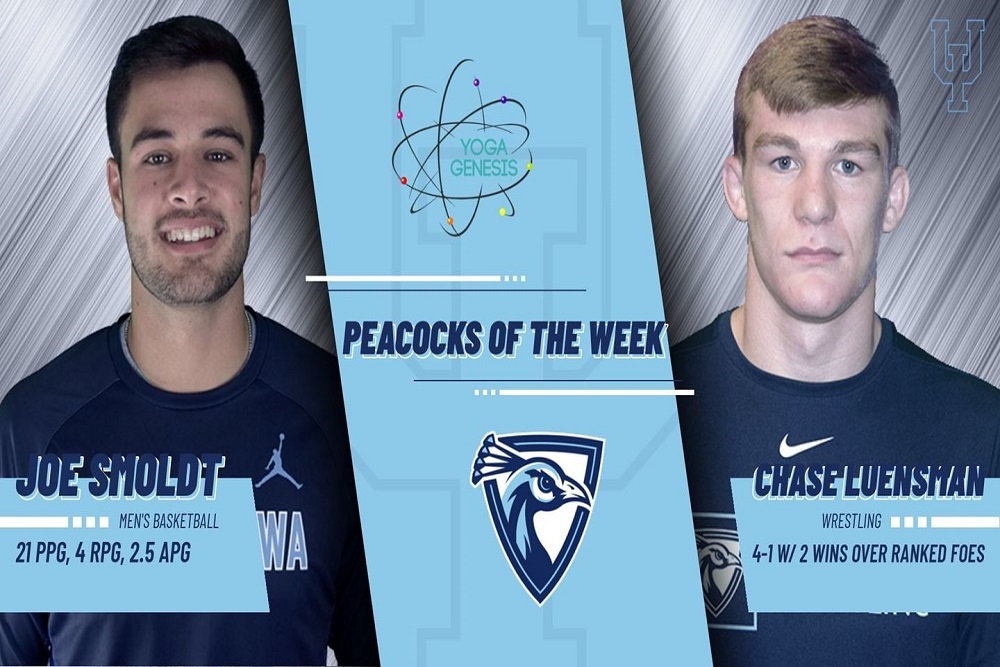 This week's Yoga Genesis Peacocks of the Week are Joe Smoldt of men's basketball and Chase Luensman of wrestling. Both were huge parts of the successful weeks for the men's basketball and wrestling programs. Smoldt averaged 21 points, 4 rebounds and 2.5 assists per game while leading the men's basketball team to a pair of wins in Dorman Memorial Gymnasium. UIU is now in a three-way tie for second place in the NSIC South Division. Luensman posted a 4-1 record at 149 pounds helping to lead Upper Iowa to a seventh place finish at the NWCA National Duals in Louisville, Kentucky. The true freshman posted a pair of wins over nationally-ranked opponents and lost his only match in a 7-5 decision to the reigning two-time NCAA Division II Champion and current No. 1 ranked wrestler.

- The junior averaged 21 points per game including a 29-point performance against Augustana on Friday night in which he surpassed the 1,000 career points milestone

- Smoldt is the 28th player in Upper Iowa history to score at least 1,000 points

- In addition to his 21 points per game, Smoldt tallied 8 rebounds, 5 assists and 2 steals in the two games

- The 149-pounder picked up a 7-3 win over No. 12 Juwan Edmond of McKendree, a 13-9 decision over Noah Ottum of Colorado Mines, a 10-4 decision over No. 5 Christopher Donathan of Tiffin and a forfeit in UIU's dual with Gannon to account for his four wins

- The lone blemish on his weekend came in a 7-5 loss to Chris Eddins Jr., who is ranked No. 1 and is the reigning two-time NCAA Division II Champion

Yoga Genesis is located on Main Street in Fayette. Check them out for a safe and comfortable yoga experience. Whether you're a yoga expert, or looking to attend your first class, the instructors at Yoga Gensis will make you feel comfortable. Visit them on Facebook at facebook.com/yoga.genesis.ia to learn more or inquire about classes.