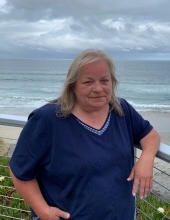 Kelly Leigh McCuddin was born on February 20, 1961 at Des Moines, Iowa. Kelly passed from this life on January 17, 2020 after a long struggle with Sleep Apnea.

Kelly attended the Interstate 35 Community Schools graduating with the class of 1979. She began employment with the Principal Financial Group the fall of 1979 and completed 40 years of service in September, 2019. In addition, she took classes at the Des Moines Area Community College.

Kelly had a heart for animals, especially rabbits and guinea pigs. She most recently adopted a rabbit, "Lucy" and a guinea pig, "Higgins." Kelly enjoyed volunteering at the Animal Rescue League and photographed many small animals looking for adoption. Kelly had a creative flair with both photography and art. She took classes at the Des Moines Art Center.

Each March or April, Kelly joined her mom and Terry (Papa Bear, she called him) for a vacation in Solana Beach, California. She loved the ocean and liked to go on whale watching trips.