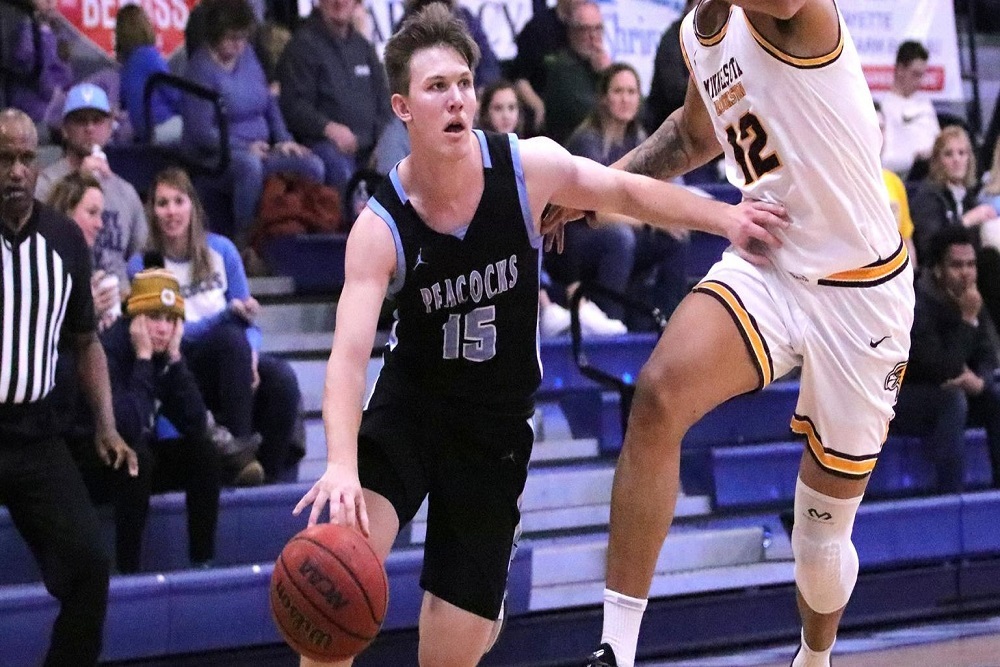 Upper Iowa defeated the University of Sioux Falls by a 68-60 count Friday evening. The win is the Peacocks' fifth straight victory. With the win, Upper Iowa is just one game out of first place behind Sioux Falls in the NSIC South Division Standings. UIU now holds sole possession of second place in the NSIC South as Minnesota State University, Mankato fell 73-71 to Wayne State University this evening. The 60-points that the Peacocks allowed tonight is the lowest amount that UIU has given up this season. After tonight, Upper Iowa improves to 12-7 overall, 9-4 in the NSIC while Sioux Falls moves to a 14-5 mark, 10-3 in the NSIC.

Upper Iowa used an 11-0 run to get ahead early on. The stretch, fueled by a pair of layups from Lucas Duax, put the Peacocks up 11-2 with 15:53 to play in the first half. Sioux Falls retaliated with an 11-2 run of their own making it a one-possession game as the score stood at 18-16 with 10:08 to play. The game see-sawed for the remainder of the first frame. The Cougars led at the half by a 39-38 count.

Jake Hilmer and Cade Moritz had eight points apiece at halftime. Hilmer went 3-4 (75%) from the floor including 2-2 from deep. He also grabbed four rebounds and dished out three assists in the first half. Moritz was 4-4 from the field and came down with five rebounds in the opening period.

A 9-2 run that included six unanswered points provided by Moritz put Upper Iowa back on top 52-45 with 14:58 to go. The Cougars immediately clawed back with a 9-3 run of their own that tied the game at 52 with 9:59 to play. Amid the stretch, UIU was held scoreless for over six minutes and neither team scored for a 3:23 second span.

A 12-4 advantage propelled the Peacocks ahead of the Cougars, 64-56 with 1:33 left on the clock. Hilmer provided seven of the points scored during the stretch including two pivotal threes that pushed the Peacocks over the edge. Each team scored four points in the final moments of the game resulting in the 68-60 Upper Iowa victory.

The 68 points scored tonight is the lowest amount that UIU has totaled in a victory all season while the 60 points put up by USF is the least UIU has allowed in 2019-20.

Hilmer led all scorers with 17 points going 5-8 (62.5%) from the field including 4-6 (66.6%) from three as well as 3-3 from the free-throw line. Hilmer also came down with six rebounds and distributed five assists.

UP NEXT… The road trip continues onto Marshall, Minn. where UIU will face the Mustangs of Southwest Minnesota State University on Saturday, Jan. 25 at 5:30 p.m. Live stats, a webcast, and an audio broadcast will be available at UIUPeacocks.com/LIVE. The game will also stream live on the NSIC app through Roku and Fire devices, as well as Apple and Android TV.