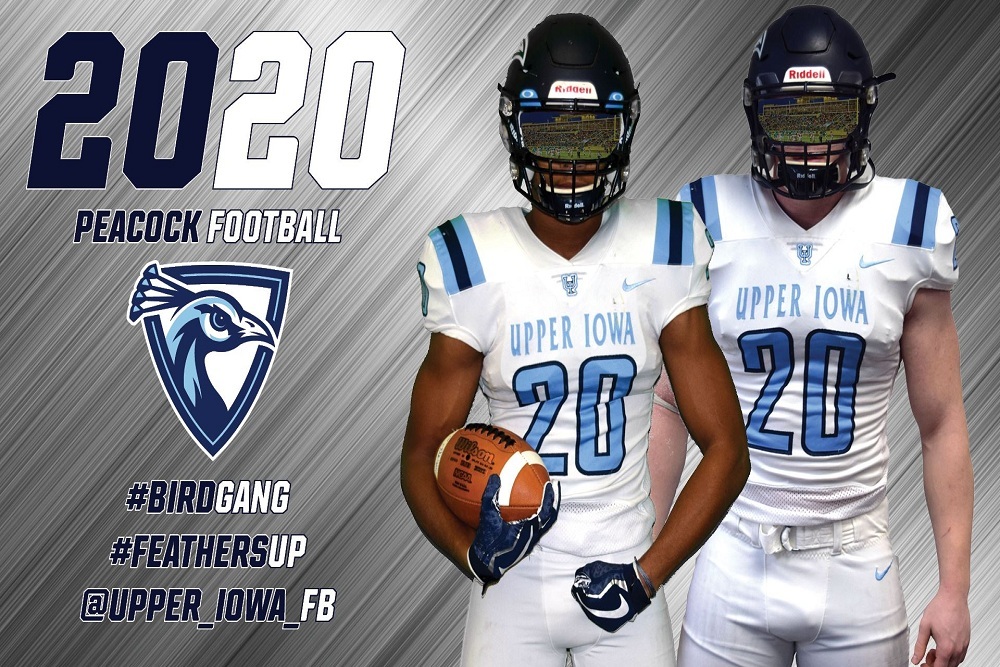 The Upper Iowa University football team and coaching staff led by Head Coach Jason Hoskins announced its class of recruits for the 2020 season today. The class includes commitments from forty-one student-athletes to attend Upper Iowa and compete for the 2020 Peacock football team. The group includes student-athletes that signed National Letters of Intent or acceptance letters to Upper Iowa. Included in this class of recruits are nine linebackers, seven wide receivers, seven running backs, five defensive lineman, five defensive backs, three offensive linemen, three tight ends and two quarterbacks. Fourteen different states are represented by the signees hometowns with the bulk coming from the Midwest. Four are from Iowa, while twenty-six more come from neighboring states including ten from Wisconsin, nine from Illinois, five from Minnesota and two from Missouri. The Peacocks grabbed two recruits from California and Texas and one each from Florida, North Carolina, Pennsylvania, Virginia, Mississippi, Tennessee and Michigan.

"Our coaches and staff are extremely happy to announce the 2020 signing class," said Hoskins. "We were able to address some of our needs with quality talent. We were able to add some athleticism at every position and increase our overall depth. We currently have five of these commitments on campus and we look forward to having the rest of the class join us this summer. The enthusiasm we have with our current team and our new commitments about the program is contagious and they are all ready to continue building this program #OurWay."

Upper Iowa finished the 2019 campaign with a 2-9 record highlighted by a win over the University of Minnesota Crookston, 45-24, at home and the program's first win over the University of Minnesota Duluth, 23-13, who was receiving votes in the AFCA Top 25 at the time of the game. The Peacocks lost four of their games by a combined 20 points or 5 points per game including a 28-23 loss to Concordia University, St. Paul, a 35-28 defeat to Southwest Minnesota State University, a 24-22 decision to Northern State University and a 27-21 loss at the University of Mary. Four Peacocks were named to the 2019 All-NSIC Football Team including defensive end Erik Hansen, All-NSIC South Division First Team, as well as wide receiver Alexander Stevens, offensive lineman Sam Jennings and defensive end Christian Ruff, who were all tabbed as All-NSIC South Division honorable mention performers. In addition to the All-NSIC South Division First Team honor, Hansen was named to the Don Hansen All-America third team and a pair of all-region second teams (Don Hansen Super Region Four and D2CCA All-Super Region Four).

The 2020 Upper Iowa football recruits are listed below by position starting with the defense and then moving to the offense.

athlete of the month… team captain

Relay for Life Organizer for 3 Years

Honors: 2019 Coaches Award for Most Dedicated